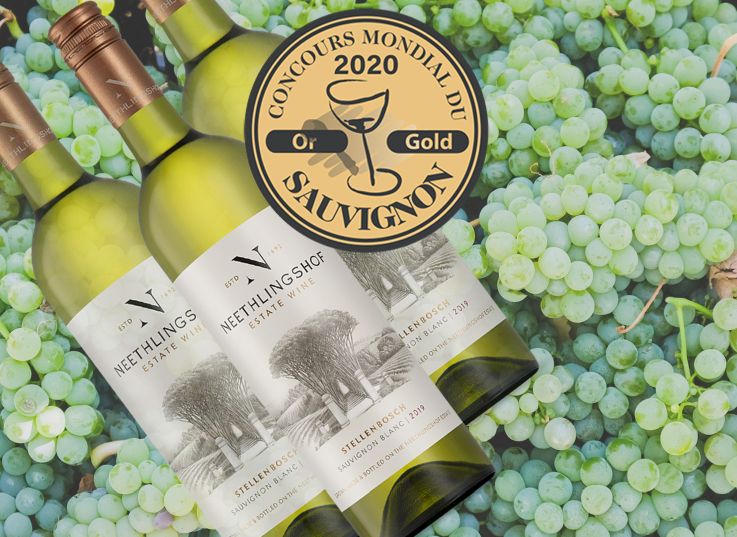 Neethlingshof Estate in Stellenbosch won one of only 12 gold medals awarded to South African wine producers at this year’s Concours Mondial du Sauvignon, the most prestigious international competition for Sauvignon Blanc wines. The award went to the Neethlingshof Sauvignon Blanc 2019.

Held this year in Touraine in the Loire Valley of France, the 11th rendition of Concours Sauvignon attracted 1 100 wines entered from 24 countries, with a total of 134 wines being awarded a gold medal.

The panel of judges included leading winemakers, critics, sommeliers and academics from around the world, making Concours Mondial du Sauvignon the leading competition of its kind internationally.

De Wet Viljoen, cellarmaster of Neethlingshof Estate, says the gold medal achieved at Concours du Sauvignon was somewhat of a surprise, seeing as the 2019 was one of the most challenging vintages for Neethlingshof and the rest of the Cape wine industry.

“The erratic climate conditions caused a figurative perfect storm during the 2019 season,” says Viljoen, “the major influence being the prolonged Cape drought that culminated in the winter of 2018 with the absence of the necessary rain required to break the drought.”

Neethlingshof’s average rainfall is 750mm, but the farm only received 580mm in the year leading to the 2019 vintage.

Yet, says Viljoen, the terroir of Neethlingshof has shown itself suited to growing award-winning Sauvignon Blanc, the most planted variety on the venerable Stellenbosch estate with a history going back to 1692.

“The farm’s south-west facing vineyards get the full brunt of the winds blowing in from the Atlantic Ocean in False Bay,” he says. “Last year’s Sauvignon Blanc was already portraying strong varietal characters as a young wine at bottling. But after a year in the bottle it has gained complexity and is just a gorgeous wine – better than I would have predicted seeing all the obstacles we saw during that year’s growing season.”

The secret to great Sauvignon Blanc, says Viljoen, is not to have one. “Just let the vineyard and the grapes do the work. Picking at the right time is crucial and we find between 22° and 23.5° balling leads to the right balance between beguiling tropical notes and zippy, perky green freshness. In the cellar the wine is fermented at cool temperatures, after which a short period on the lees adds palate-weight and complexity. The grapes do all the work, all we have to do is watch the timing as to when to pick and when to bottle.”

South Africa was the 5th most successful producer at this year’s Concours Mondial du Sauvignon, its total tally of gold, silver and bronze medals showing a 70% increase over last year’s results.